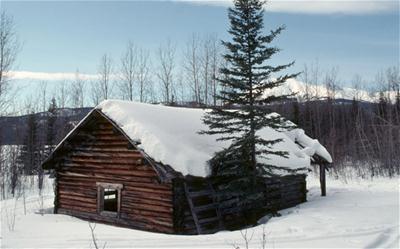 Climate change, such as the warming trend recorded over the past decades, shows up in our water resources. While it is difficult to pinpoint exactly how climate change is affecting the hydrological cycle and water quality at the Yukon scale, here are some of the results to date.

In Yukon over the last several decades, winter and summer temperatures have increased in all regions, and the forecast is for continued warming over the coming decades.

Snowcover melt and associated floods are the most important hydrologic event of the year in many river basins in Yukon. Winter and early-spring snow depths decreased over much of Canada between 1946 and 1995. Northern Yukon experienced similar decreases, but increases occurred in parts of northern British Columbia. Snowmelt has started earlier in Yukon over recent decades, particularly in mountain streams, and multiple analyses confirm that the period of snow-cover is decreasing across the Arctic. In fact, 2010 set a new record for low spring snow-cover duration. The trend is likely to continue, bringing earlier peak flows to most Yukon river basins.

Climate change could have a critical impact on evaporation and, therefore, on water availability. However, the mechanisms that control evaporation are not clearly understood. Increasing temperatures can lead to an increase or a decrease in evaporation, but so can other factors, such as increased cloudiness. An analysis of global evaporation trends under climate change showed that evaporation is likely to increase in high latitudes. A complicating factor is evapotranspiration, the evaporation of water from plant leaves, which is affected by growing conditions and the number and kind of plants, as well as by the direct impact of climate.

In northern regions, permafrost has a huge impact on local hydrology by determining how far water can penetrate into the ground and, therefore, how quickly it moves downslope. Climate change is causing a change in the permafrost distribution, with increasing air temperatures leading to permafrost warming and thawing. The result is a thicker active layer above the permafrost. Permafrost degradation is expected to be greatest within the discontinuous and sporadic zones. Changes in permafrost can lead to shifts in drainage patterns, creation of new ponds and wetlands, changes in water chemistry as groundwater penetrates deeper into the soil, and shifts in the timing of peak and minimum flows.

The hydrology of much of the southwestern Yukon is tied to glaciers, which influence both streamflow and water quality. Changes to glaciers due to general climate change could have a profound influence on the hydrology of Yukon’s glacier-dominated basins. In 50 years, between 1958 and 2008, the total ice area in Yukon shrank by 22%. Precisely what this kind of change means for Yukon’s freshwater resources remains unclear. As glaciers recede, streamflow will decrease, but the decrease might not happen right away. At first, increased glacial meltwaters will likely contribute greater flows downstream. If some basins lose their glaciers altogether, the result is likely to be a dramatic shift in streamflow patterns. Glacial melt can also lead to short-term, catastrophic effects, such as the formation of unstable glacial lakes and outburst floods.

Break-up dates for the Yukon River at Dawson since 1896 show that the break-up date advanced 5 days per century to 1998, and even faster in the last two decades. A similar trend is noted for the Porcupine River at Old Crow. Less is known about complex variables related to river ice, such as ice-cover thickness or ice jams, but Yukon might already be experiencing related changes. In 2003, a midwinter break-up and associated ice jam occurred on the Klondike River at Dawson, flooding parts of the community. The event was triggered by record high air temperatures and rainfall, perhaps a direct result of climate warming.

Yukon streams belong to four hydrologic response types: Glacial, Interior, Northern, and Arctic. All are shaped by different conditions, exhibit different streamflow patterns, and show different patterns of response to changes in climate. Climate projections predict increased river in northern rivers through the next century, however, the degree and direction of future changes remain far from certain and are under active research.

How climate change will affect groundwater is not well understood. However, the impacts are important. Most of Yukon’s municipal water supply comes from groundwater, and late-winter streamflow in Yukon consists almost entirely of groundwater. Climate change could affect the amount of groundwater available and the timing of groundwater flow through changes in precipitation, melt timing, and permafrost thawing, which deepens the active layer and changes the conditions for underground storage and movement of water. Trends in streamflow investigated over 20 to 50 year periods in the Yukon River Basin showed significant increases in estimated groundwater flow. In Yukon, the largest increases in estimated groundwater inputs were detected in the Yukon headwaters and in the Porcupine River watershed.

Changes in the quantity and temperature of water resources will lead inevitably to changes in water quality. Lower water levels tend to increase concentrations of ions (e.g., dissolved metals) in water. High flows and flooding flush sediment and contaminants, both natural and anthropogenic, into the water system. Higher water temperatures affect ecosystems, human health, and the reliability and costs of water systems. The complexity of a hydrologic system makes it difficult to predict the impacts of climate change, especially in the North where the cryosphere—snow, ice, and permafrost—is an integral part of the system and a complicating factor.

A mid-winter flood in Dawson in 2002-2003 appears to have been triggered by record-high temperatures and the unusual phenomenon of December rainfall. In 2007, two thermokarst lakes in Old Crow Flats drained catastrophically, apparently as a result of decaying permafrost on their margins. That same year, flooding in the Southern Lakes, the result of heightened glacial melt in a hot summer and summer precipitation, caused extensive property damage.