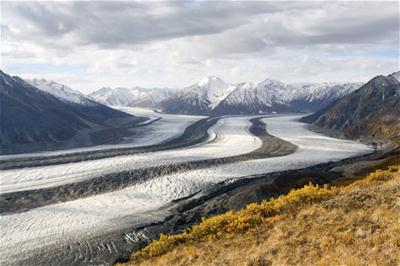 The cryosphere is the portion of the Earth system that comprises frozen water. This includes:

In Yukon, elements of the cryosphere, particularly glaciers, permafrost, and river ice, influence the timing, magnitude, and character of surface water flows.

Glaciers influence both streamflow and water quality in Yukon. The southwest Coast and Saint Elias mountain regions and portions of the Mackenzie Mountains make up the glaciated regions in the territory. Glaciers in northern British Columbia at the headwaters of the Yukon River Basin are important to Yukon’s hydrologic regime, influencing flows on the Yukon River at Whitehorse and communities downstream.

These flows tend to increase rapidly in springtime in response to snowmelt and peak later in the summer from high elevation snow and glacier melt inputs; in comparison, basins without glacier influences tend to peak earlier. Glaciers can also contribute large inputs of suspended sediment to downstream tributaries. Such is the case in the White River basin, with headwaters in the St. Elias Range, which supplies large amounts of suspended sediment and carbonate to the Yukon River increasing the turbidity of the river for the rest of its course to the Bering Sea.

Permafrost is ground remaining at or below 0°C continuously for at least 2 years. In Yukon, permafrost distribution, thickness, and the thickness of the active layer (the surface layer that thaws annually) play an important role in influencing the movement of water. Ice-rich permafrost restricts rain or snowmelt infiltration to subsurface zones, resulting in surface storage in the form of ponds or wetlands, such as in the Old Crow Flats.

A thicker active layer enhances infiltration and associated groundwater recharge, which results in greater groundwater contributions to streamflow. Three permafrost zones exist in Yukon, distinguished by the relative amount of underlying permafrost. Continuous permafrost areas have greater than 90% coverage, discontinuous areas have between 50–90% coverage, and sporadic areas have 10–50% coverage.

River ice is important to both socio-economic and environmental aspects of life in cold regions. In Yukon, frozen rivers are used for transportation purposes such as ice bridges.

However, freeze-up and break-up processes often produce ice jams which may result in flooding, with consequences related to public safety, damage to property and infrastructure, and disruption of transportation and communication networks and hydroelectric operations. Numerous Yukon communities have historically experienced ice jam flooding during the break-up season, with the most severe floods at Dawson City on the Yukon River and Old Crow on the Porcupine River.