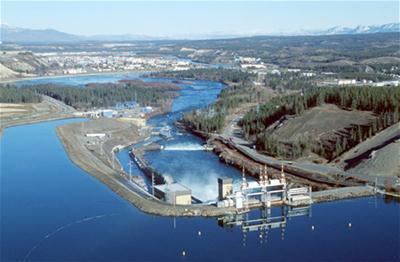 For related information, read up on Licensing and Permits.

Hydro power is the main form of electricity production in Yukon, with the scale ranging from the large four-turbine plant at Whitehorse Rapids to small, in-stream micro-hydro installations serving only one user. Yukon energy providers continue to assesses potential hydro project options to meet growing energy demand. These options include the expansion of existing facilities and new projects that range in size from very small to very large.

Secure access to water is critical for existing and new hydroelectric power generation. The sector is concerned about extreme events that could affect hydro systems in the future and long-term climate change impacts that could pose threats beyond what has been experienced in the past.

Water is critical to every stage of placer mining. Placer miners excavate soil and gravel, often in streambeds, to uncover the gold-bearing gravels. Water thaws the frozen ground, washes the gold-bearing gravel loose, and sluices the gold free. Other fine materials are washed away, resulting in high concentrations of suspended sediments in the discharge water. A sustained high in gold prices could encourage greater frontier exploration in the placer mining sector, but accessibility and meeting sediment discharge standards will continue to challenge the industry.

For the hard rock mining sector, increasing precipitation could make it more difficult to manage water quality. With little baseline data available, it is difficult to assess impacts on the aquatic environment under changing conditions or to incorporate climate change concerns into the design of long-term projects. Climate change could have both positive and negative impacts on Yukon placer mining. Reduced permafrost cover could make mining easier and cheaper, but shorter ice-road seasons could make site access harder and more expensive. Lack of water would halt placer mining altogether.

Less than 2% of Yukon lands are suitable for agricultural development, mainly in the major river valleys. Yukon farmers need water for irrigation, crop washing, livestock, and home use. Most agriculture production occurs in southwest Yukon where droughts between April and July are common, so access to irrigation water is important. There is likely to be more demand in the future for local vegetables and locally grown foods, with demand for hay crops remaining strong. One of the biggest constraints on growth is the accessibility of water, and the amount of agricultural land adjacent to water courses is limited.

In southwestern Yukon, where drought conditions and constant irrigation are the norm, the integrity of irrigation systems is the largest vulnerability. Changing temperature and precipitation conditions will affect the amount of irrigation water available and the amount required to produce a crop.

Yukon’s freshwater fishery is dominated by recreational angling, with a small component of commercial, domestic, and First Nations fisheries concentrated on lake trout and lake whitefish. Yukon also has a small aquaculture industry composed of pothole-lake fish farms, where fish are stocked and grown in closed-system pothole lakes, and tank farm operations that raise and export Arctic char and Arctic char eggs. Although there is room for growth in the freshwater fishery, it is expected to decline due to lack of participation by youth. Not all fish farm licences issued on pothole lakes are currently active. The existing licensed capacity, combined with tank farms and hatcheries, could produce significant quantities of commercial fish products.

Changing hydrological or water quality conditions caused by climate change could aggravate existing stressors, including the spread of fish diseases and invasive species, as well as stresses on fish habitat from such pressures as residential development, forestry, hydro projects, roads, and mining.

Oil and gas operations use water in drilling muds, water flooding to extract oil and gas, and ice roads to gain access to oil and gas wells. Currently, there are no producing wells in Yukon, while 75 exploration wells have been drilled, mostly in the Liard Plateau, Peel Plateau, or Eagle Plain basins. Active exploration is underway in the Eagle Plains Basin. Future production, however, depends on the size of reserves, the price of oil, the cost of production, and the cost and accessibility of transportation.

Industry concerns centre around the availability of enough water for ice roads in the Eagle Plains area. To this end, the industry has developed best practices to limit water use, in addition to considering summer access where it is an option.

Yukon’s forestry sector is small, with only about 70 commercial operators. Most harvest fuelwood for domestic heating, while two operating mills produce rough lumber for local markets. Given the small scale of Yukon forestry, its impact on water resources is minimal. The Yukon forestry sector’s growth is likely limited, given the small interest in the available forest resource. There is potential opportunity in the use of fuels such as wood chips or pellets in central heating.

Climate change might lead to more forest fires and insect disturbances, as well as changes to forest species, which could in turn have dramatic effects on water resources in forested watersheds.